Overview of the ISDA CDM¶

What is the ISDA CDM¶

The ISDA Common Domain Model (CDM) is a standardised, machine-readable and machine-executable blueprint for how financial products are traded and managed across the transaction lifecycle. It is represented as a domain model and distributed in open source.

For further information about the CDM and its applications, please consult the CDM section of the ISDA website or contact ISDA directly at marketinfrastructureandtechnology@isda.org.

To support these objectives, the CDM is built according to a set of design principles that include the following concepts:

These design principles are further detailed in the Design Principles section of the CDM documentation.

The CDM governance framework regulates the development of the CDM in open source.

The CDM is made of three sets of components, as laid-out in the ISDA CDM components diagram below: 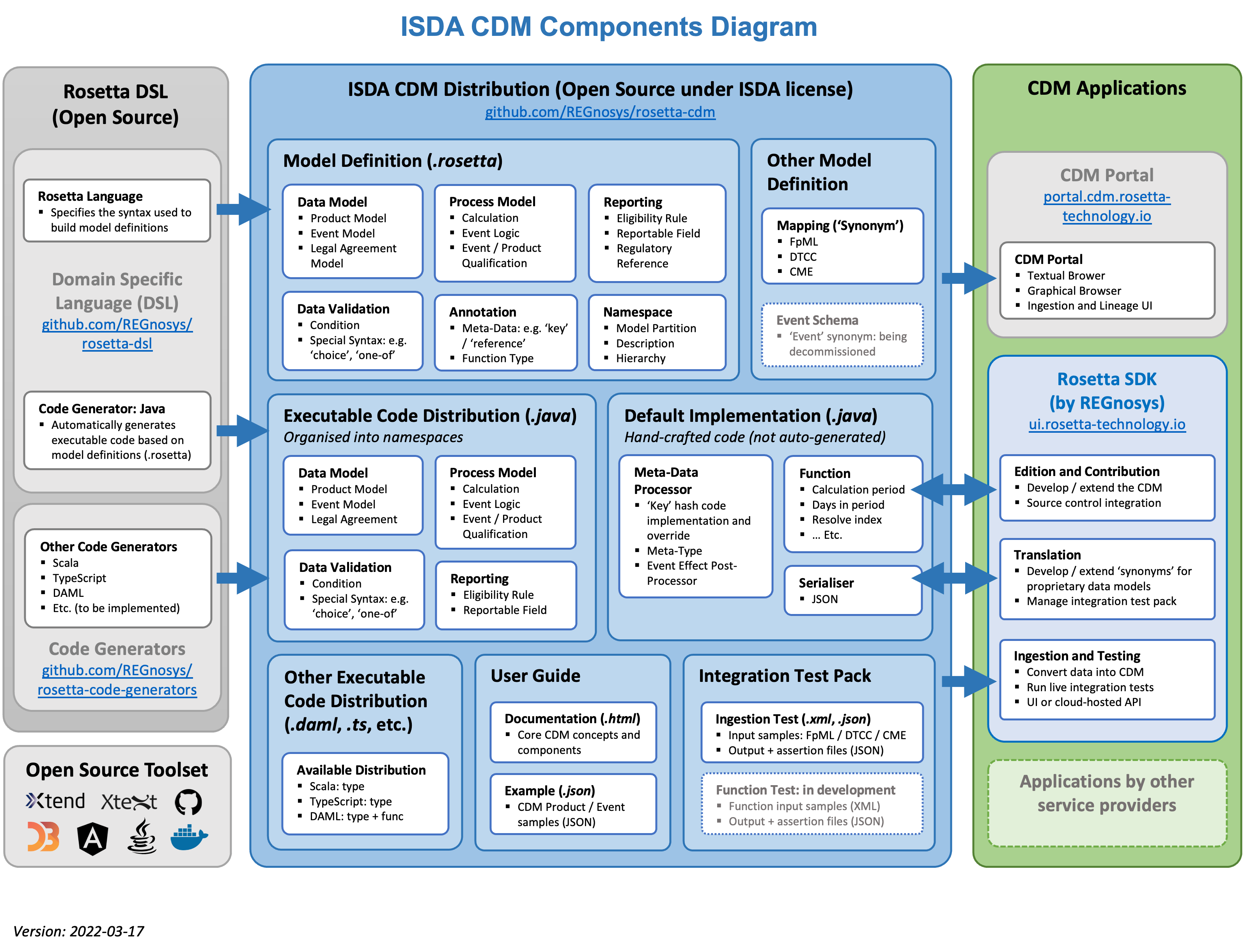 Only the Java executable code distribution is complete: i.e. it represents the entire CDM as defined in Rosetta (plus any associated default implementation). Other distributions may only capture parts of the model: for instance, the Scala and TypeScript distributions include the complete data model and function specifications, but not the functions’ executable code.

The CDM is written in a Domain-Specific Language (DSL) called the Rosetta DSL, that comprises a language (i.e. syntax, semantics and rules) and code generators.

All the language components, their syntax and purpose are detailed in the Rosetta DSL Documentation. The documentation also describes the mechanism to write and use code generators.

An eco-system of CDM-based application components from software providers exists in order to support the adoption of CDM and the implementation of CDM-based production systems by industry participants. These applications may be open source software or licensed under commercial terms. In particular:

The CDM Portal and Rosetta have been developed by technology firm REGnosys. ISDA encourages the adoption of CDM by software providers but does not endorse any CDM application component.

The Java distribution of the CDM is designed to be built and used with Maven.

It depends on some open source java artifacts which are freely available from an artifact repository. Maven can be configured to use this repository using the repository settings contained in the settings.xml file in the CDM jar.

These guidelines are intended as a technical documentation for developers to make use of the Java distribution in their implementation.